In April 2020, the rand touched lows of R19.34 to the US dollar in the wake of the beginning of the Covid-19 crisis and a decision from Moody’s to downgrade South Africa’s sovereign credit rating in the first quarter of the year. At that time, we published an article about why the rand was likely to remain vulnerable in the short-term, before experiencing some relative strength in the 12 to 18 months to follow.

With the rand powering to R13.41 to the US dollar in early June 2021, before rebounding to around R14.30/$, the picture today is a dramatic reversal of the pandemic-induced rand weakness. As such, this now presents an opportune moment to clarify our expectations for the rand over the medium term and to offer insight into our current investment outlook, particularly why we believe this is a good time to invest offshore.

Is the rand overbought at current levels?

To reaffirm our approach, one way we consider whether to externalise funds at a particular moment is to consider the fair value of the rand. We apply a proprietary formula sourced from Dynasty’s research partner, Analytics Consulting, which calculates the level at which the rand should be trading by benchmarking it against the dollar, relative to where the dollar is trading against its developed-market peers, including the euro, yen and pound. 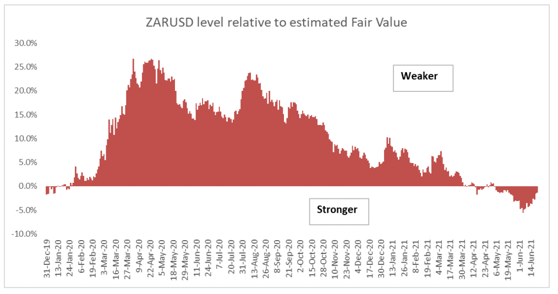 From the chart you will note that in April 2020, the rand was heavily oversold relative to its peers and traded at a discount to fair value in excess of 25% at its lowest points. When we jump forward a year, the rand had shown a remarkable bounce-back and, until recently, still also had momentum on its side. However, when we apply Analytics’ methodology to the rand, we find that it is currently trading at a 2.4% premium to fair value.

This premium is best explained by the higher beta levels as a result the rand being one of the most liquid emerging market currencies — when the stars are correctly aligned, the rand gets an outsized benefit from positive signals in the global markets. With risk-on favouring emerging markets, a US dollar that remains weak amid continued Fed and fiscal stimulus, a booming commodity market and agricultural prices and yields both leading to a substantial trade surpluses, international market conditions could hardly be better for the rand!

These international factors have proven to be so positive for the rand that local risks and bad news are not currently priced into its level against the dollar at all. Indeed, the rand has mostly shrugged off factors such as ongoing political instability, continued wrangling about expropriation without compensation, the fact that our sovereign debt has been downgraded deep into non-investment grade territory, and dire Eskom load shedding, each of which adds downside risk.

Momentum on the rand’s side

In the short term, we might expect the rand to remain within a range of R13.40/$ to R14.80/$, yet prone to setbacks caused by either global or domestic developments.  When viewed over the medium to long term we anticipate the currency remaining vulnerable to international factors such as a potential resurgence of the virus and its economic impacts, interest rate action from central banks in rich-world countries, or risk-off due to trade wars or other geopolitical factors.

There is also the ever-present possibility of the domestic chickens coming home to roost. While there have recently been some welcome announcements about the partial privatisation of SAA, the lifting of the threshold for self-generated power and the fact that ex-President Zuma should very soon be handing himself over to serve his prison sentence, there are still serious policy and structural issues hampering economic prosperity.

Should the global picture take a turn for the worse, the rand may be severely punished for weak growth, a lack of policy certainty, and high levels of government debt. We would thus not be surprised to see the rand come under renewed pressure within the medium term (i.e., over the next 18-24 months).

As per last year’s article, we expect the rand to remain volatile and vulnerable for the foreseeable future—continuing its pattern of dropping beyond fair value in times of stress, and then correcting significantly, often to the point of over-correction. There is nothing new in this—we have seen it happen in every currency crisis since the late 1990s, as shown in the following chart. 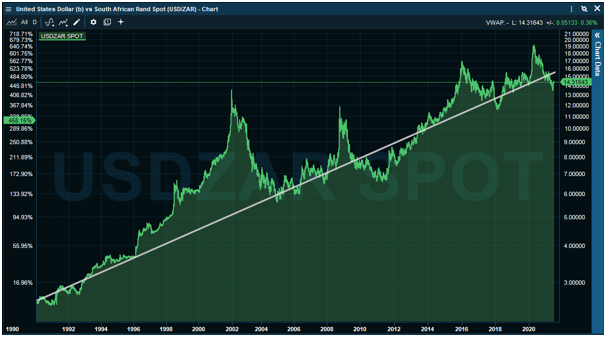 The white line in the above chart is an indication of the average rate at which the rand weakens each year, which is about 5.2% per annum. Over the longer term, we would expect to see the rand depreciate at a level that reflects long-term inflation and interest rate differentials between South Africa and the US. This differential is narrower than before, but it still suggests a weaker rand in the years to come.

A window of opportunity?

Analytics’ chart from January 2005 to late June 2021, above, shows us how rare it is for the rand to trade stronger than fair value on a South Africa-specific basis. Per the chart below, which is depicted over the same time period, over the last five years the rand has, on average, traded 5.3% lower than fair value and 6% over the last 10 years. As further depicted in the 30-year chart further above, the rand spends as much as 85% of the time above (weaker than) the long-term trend line.

From this analysis it is clear that the current rand/dollar exchange rate is not representative of a re-rating of the rand’s own value, because our domestic fundamentals do not justify this.

We conclude that, from the above research, this period of rand strength could offer a valuable window of opportunity for clients to remit funds offshore where they are not paying a premium to do so. While there has been a small retreat of late, from the lows of R13.40/$ to the current levels of R14.30/$, this is only a reversion to the levels of early May 2020 and remains at levels of strength not seen since prior to the middle of January 2020.

We thus retain our long-held bias towards moving funds offshore, given the opportunity set is so much more attractive, the economic growth prospects are more certain, and the diversification away from SA-specific risk is much more defendable. As always, this will be done in a manner that is appropriate for each client’s personal circumstances and objectives.

The Justices Deliver Accountability, at Last