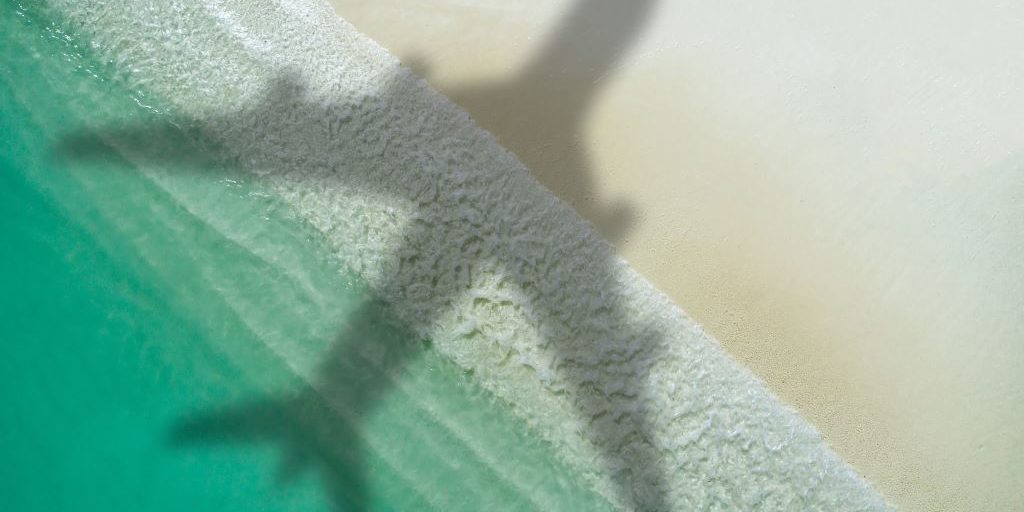 We have many clients in South Africa who are content with their lifestyle and have no plans to move abroad any time soon. They enjoy the weather, have close family ties in the country, and believe that they can sustain their way of life into retirement and beyond. The question that many of them ask is whether it is as important for them to invest offshore as it is for a family that plans to emigrate.

Our answer is that their money is indifferent to the climate and will thrive wherever the best opportunity sets are. Best of all, an investor’s money doesn’t need to live in the same country as they do. It is a relatively simple matter to get foreign exchange clearing to invest abroad. There are also many South African-domiciled funds that offer access to offshore assets, which we usually recommend for local trusts and companies.

Though our clients have heard this from us repeatedly, it’s worth underlining the point — during a relatively long period in which the rand has not depreciated from point to point over the last five years — that we believe there are stronger opportunities for investors offshore than there are in the South African markets. Let’s take a closer look at our rationale for offshore investing:

Risk diversification – In principle, we generally advise our clients not to put all their eggs in one basket. The level of diversification may differ among people with different financial standings, but it’s generally not wise to concentrate all of your wealth into one asset class or into one geography. Offshore investment means you’re not betting on just one country, but on multiple jurisdictions.

Political risk remains high – Political risk in South Africa has not dissipated under President Cyril Ramaphosa. The President doesn’t have a commanding majority in his party and destructive factional battles within the ANC are likely to remain a feature of South African political life for the foreseeable future. The  radical economic transformation  (RET) faction continues to disrupt the much-needed reform landscape and its threat to impose potentially economically ruinous policies remains ever-present.

Larger opportunity set – The number of investable companies on the JSE has shrunk from more than 600 in 2000 to less than 340 at the end of 2020. By contrast, there are around 6,000 listed companies on the New York Stock Exchange and Nasdaq combined. These include companies in sectors that are poorly represented on the JSE, such as technology and pharmaceuticals. This isn’t surprising, given that South Africa accounts for only about 0.6% of global GDP. Focusing your portfolio only on local opportunities effectively means allowing the vast majority of investment opportunities in a globalised world to pass you by.

South African markets have underperformed for the past decade – As the graph below indicates, cumulative US dollar returns from the S&P500 for the ten years ending 31 March 2021 were many multiples of the returns delivered by the JSE. We’re looking at a total 267.9% return from the S&P500, compared to just 28.4% from the JSE, representing annualised returns of 13.9% and 2.5% respectively.

There are some robust shares on the JSE that outperformed the market. However, the best of them still trailed the returns from the outperformers on the Nasdaq or New York stock exchanges. Naspers, the best performer among large cap stocks in South Africa, shows returns that look mediocre compared to Microsoft, as the graph below reveals. The difference between Naspers and Amazon, Facebook or Netflix would be even starker. 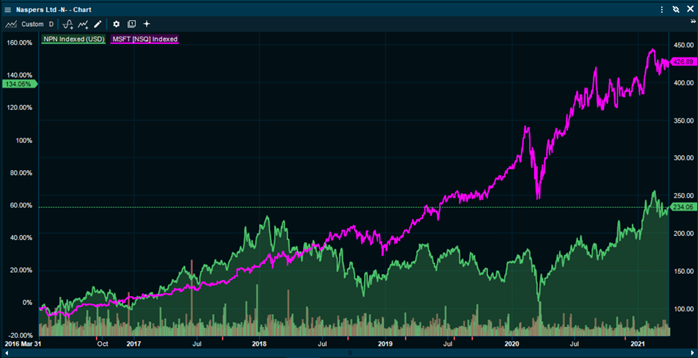 South Africa doesn’t have a good growth story to tell – Even before the Covid-19 pandemic, South Africa was in the grips of its second recession in two years. The pandemic has further exposed the country’s economic frailties, and the slow pace of vaccination means we face a long return to economic normality. In the absence of urgent economic reforms, South Africa offers tepid growth opportunities for many of its listed companies. That said, some will outperform, especially those with offshore exposure or those that are likely to benefit further from the positive swing in the commodity cycle.

It’s not just a rand story

As the points above show, investing offshore isn’t just about shielding your portfolio from the risk of rand devaluation. Indeed, the value of the rand has been relatively flat against most major currencies over the past five years, which followed the sharp declines we saw due to Nenegate and the emerging market sell-off in 2015-2016.

However, we believe that the rand remains vulnerable to both South African political and economic shocks and the vagaries of the international markets. It makes sense, therefore, to externalise some wealth both to mitigate South African specific risk and to maximise offshore opportunities. In this current period of relative rand strength, we are advising clients to invest offshore in a consistent and incremental manner.

The key is not to send money offshore in a panic when the rand plummets in response to bad local or international news. On the 30-year chart below, you would not have paid a premium for externalising funds at levels at or below the white line, which simply represents an average long-term trend of 5.2% depreciation per annum during the period. A cautious and phased approach can help you navigate rand volatility, while positioning your portfolio to take advantage of global growth opportunities.

With, in aggregate, approximately 70% of our client’s funds having been directly or indirectly invested in offshore assets over many years, our investment philosophy of “investing in the shade while you live in the sun” has delivered both superior investment returns as well as peace of mind to our South African investors.