Where to from here for the rand? 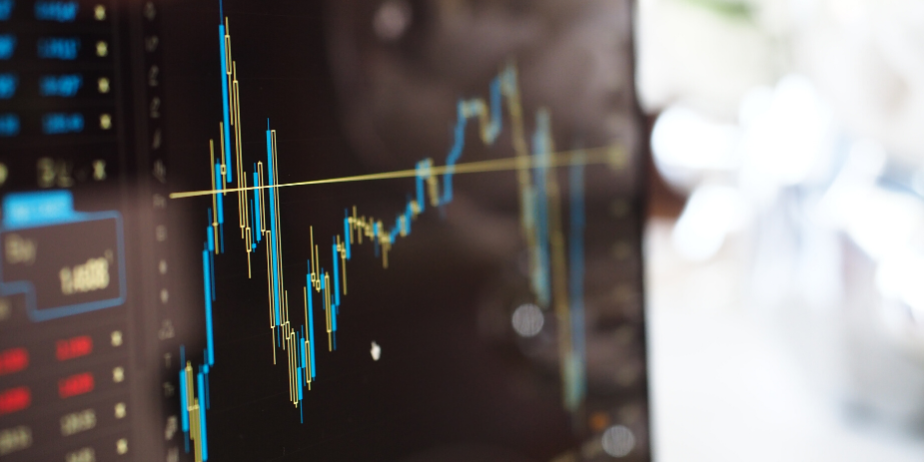 Between the global COVID-19 crisis and the decision from Moody’s to downgrade South Africa’s sovereign credit rating in Q1 2020, the rand has had a torrid year so far. Is R18.70 to the US dollar fair value, could it fall further, and what are the chances that it could rebound? As regular readers of our Dynasty newsletters will attest, we have been positioned for a weaker rand for years, and especially since late 2015’s attack on SA’s treasury. We thus feel it is our responsibility to show you how we formulate our views and illustrate some of the research that underpins our thinking.

In the graph below, one can observe that the rand was trading at R18.01/$ as of 30 March 2020 – a 22% discount to its fair value of R14.74/$. But how does one determine the fair value of the rand? We have calculated it by using Dynasty’s research partner (Dr Lance Vogel’s), proprietary method – which derives the level at which the rand should be trading by benchmarking it against the dollar relative to where the dollar is trading against its trade-weighted peers. 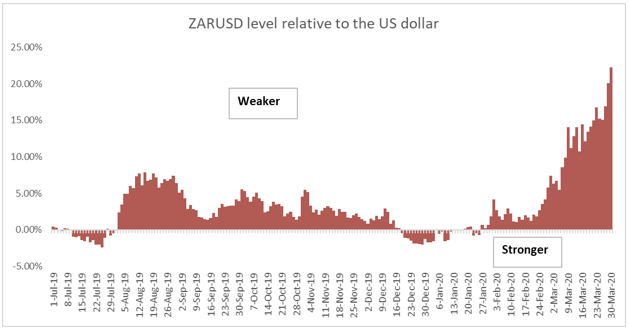 The rand is, at the time of writing, trading at R18.70/$, (and falling rapidly) which currently represents a 27% discount to this fair value.

The next graph shows that the rand has traded at a substantial discount to calculated fair value at other times of economic crisis – as much at 40% in the 2008 Global Financial Crisis and more than 30% during ‘Nenegate’ in late 2015/early 2016. 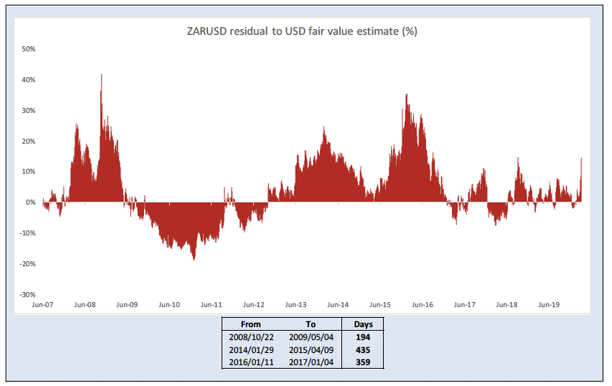 We can also look at a model that shows how the rand’s Emerging Market (EM) peers fare relative to the dollar. The rand is closely correlated to other EM currencies – as the following chart from Old Mutual illustrates, which compares the rand to currencies of commodity-producing EMs. 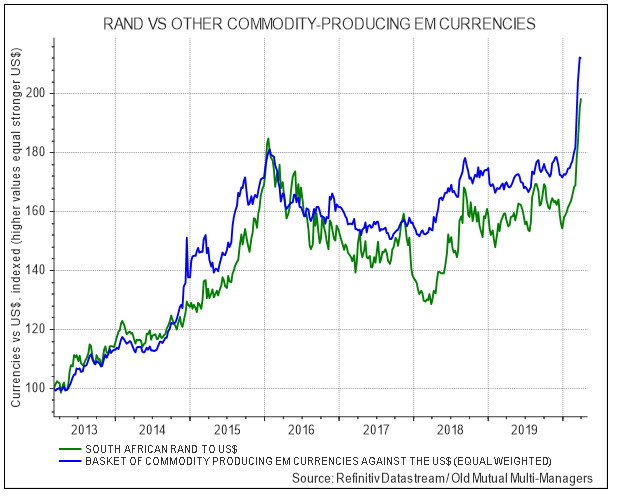 So, the rand certainly could fall further. But it would take a brave forecaster to bet in either direction in today’s volatile global and local environment.

Now, take a look at the long-term chart on a log scale below (the white line is for indicative purposes and does not relate to fair value). 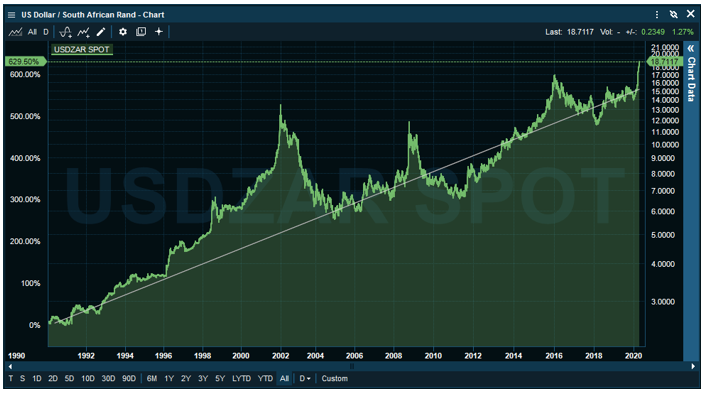 This chart shows that the rand tends to go beyond fair value in times of stress and then corrects significantly. You may think, could this time different? Perhaps it’s the beginning of the end, but probably not? We have been through these currency crises before in 2001/2002, 2008, and 2015/2016.

The white line is an indication of the average rate at which the rand weakens each year, which is about 5.2% per annum. We believe that this trend will continue due to long-term inflation and interest rate differentials between South Africa and the US. We might justify an increase in this percentage as a result of South Africa’s new non-investment grade status, or a decrease due to a structural decline in the inflation rate and interest rate differentials. We do not believe that a permanent rerating to R20/$ is justified. It may take years to recover from current levels, however.

In summary, the rand remains vulnerable and under pressure in the short-term, but we can see some relative strength in the medium term (over 12-18 months). Beyond that, the currency should continue its long-term structural trend of weakening against the dollar at somewhere near the average annual compounded rate.

Based on this analysis, we are cautious about remitting funds offshore at these levels for our clients. However, we are retaining our long-held bias towards moving funds offshore at what we regard to be opportune times. As always, this will be done in a manner that is appropriate for each client’s personal circumstances and objectives.

Focusing on quality and wealth presentation in the age of the pandemic.

ANALYSIS | Covid-19: What happens after the lockdown? – Alex Welte