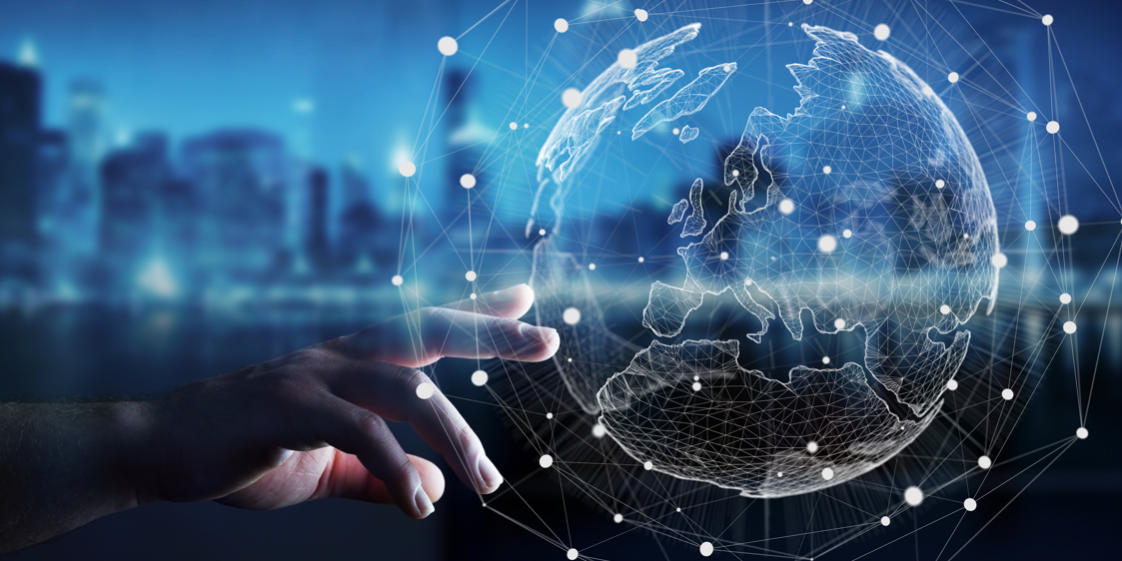 Given South Africa’s volatile currency and the fact that our economy represents less than half a percent of world GDP, astute investors will usually seek exposure to other territories. This enables them to mitigate local risks and take advantage of a wider set of global opportunities and hard currencies. The case is, however, sometimes made that investing in JSE rand hedge shares can meet these objectives, but as we will show in this article, this should not be regarded as an optimal solution.

If we look at the current state of the JSE, the Top 40 companies account for around 85% to 90% of the exchange’s total market capitalisation. Of these, about 25% are purely domestic-focused companies (SA Inc) and the remaining +-75% are rand hedges that generate at least a substantial part of their revenue in foreign currencies.

These companies range from the mighty Naspers – with its share in China’s Tencent valued higher than its JSE market capitalisation – through to commodities exporters, foreign companies with a primary or secondary listing on the JSE, and SA-listed companies that have grown their offshore businesses to be greater than their local activities.

Their focus on global markets and dollar denominated commodity prices means these rand hedge stocks tend to be less exposed to local political and economic risks such as unemployment, weak consumer demand or downgrades by the credit ratings agencies. It’s unsurprising, then, that rand hedges often outperform the local economy and their SA Inc-focused peers on the JSE.

Let’s start by looking at how SA Inc has done

It’s no secret that the South African economy is an underperformer by global standards, with tepid growth and three recessions between 2015 and 2020. Over the past year, SA Inc has fared better than it has for quite some time. SA Inc shares are up 69.15% in US$, helped in no small way by some strengthening of the rand off a very weak base from September 2020.

But what truly matters to us is performance over the medium to long term. When we look at the performance of SA Inc compared to MSCI ACWI (All Countries World Index) over the past five years, we find a 67.12% delta between cumulative performance of SA Inc (up 24.98% in US$) compared to MSCI ACWI (up 92.09%). Given weak domestic growth forecasts for 2022 and 2023 – and in the absence of meaningful policy reform, we expect SA Inc to continue to underperform over the longer term.

As the chart below shows, there is no competition between rand hedges and SA Inc and the overall Top 40 Index – rand hedges are clearly the best performers on the JSE when tracked over time. However, rand hedges are competing against global companies rather than SA Inc for investors’ capital. 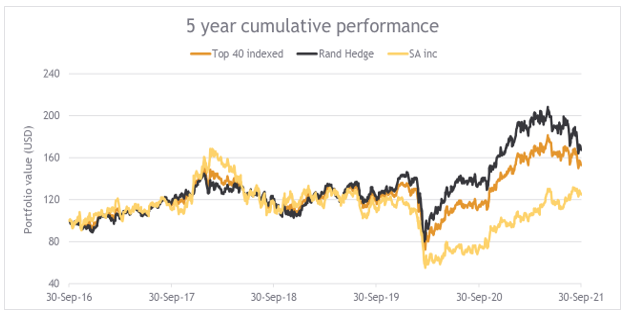 Our next set of charts below shows a relatively high correlation between the rand hedges and the MSCI ACWI performance in US$ over various timeframes. However, rand hedges show more volatility than the ACWI. When global markets dropped in March 2020, for example, they had a bigger drawdown, which is to be expected after all due to the concentration risk being higher.

However, when viewed over the longer term, their performance looks stark when compared to the benchmark, as is evidenced in the fourth chart.

The inescapable conclusion from the data we set out above is that global markets have offered stronger growth opportunities than the JSE, no matter whether you’re considering SA Inc or rand hedge shares. This is not a story only about the rand, but also about overall performance and an enhanced quality of investable opportunities. Over five years, SA Inc delivered lacklustre annualised returns of 6.61% per year in rand and 4.56% in US$ versus the MSCI at 13.95% in US$.

When it comes to the rand hedges, their annualised performance at 10.88% in US$ over five years is a little better. However, with the number of listed companies on the JSE shrinking, the concentration risk is growing. Bear in mind that local retirement funds need to invest 70% of their clients’ portfolios in South Africa, helping to lift the market. Importantly, Naspers and Prosus, even after the recent share swap, still account for the largest weighting in the ALSI. Naspers, in turn, has significant value concentrated in its Tencent holding, which is subject to the vagaries of the Chinese government, starkly brought into focus during the quarter.

Interestingly, when we compare the USD performance of Naspers, the JSE’s saviour and darling, to that of US-listed tech giant Microsoft or even the NASDAQ 100, the comparison is glaring. As depicted below (all based to 100), over the last 5 years Naspers has gained a cumulative 54% in USD, while the NASDAQ 100 has gained 201% and Microsoft a staggering 429%.

Rand hedges are also not completely immune to domestic risk. Labour unrest, financial regulations, licensing regimes, taxation and other local factors still have a bearing on their businesses, especially the commodity companies. JSE-listed shares are also more vulnerable to risk-off than quality offshore stocks due to their association with emerging markets.

When we look offshore, we see a wider set of opportunities and superior return prospects at lower risk. Not only are many other territories growing faster than South Africa, but they offer opportunities to invest in sectors such as big tech and pharma that simply don’t exist on the JSE. This research reinforces our strong offshore bias, despite the bounce-back in the JSE over the past year from oversold levels and with current valuations appearing relatively attractive against developed market peers.