The Rand’s Slippery Slope – How much is due to SA-Specific Factors? 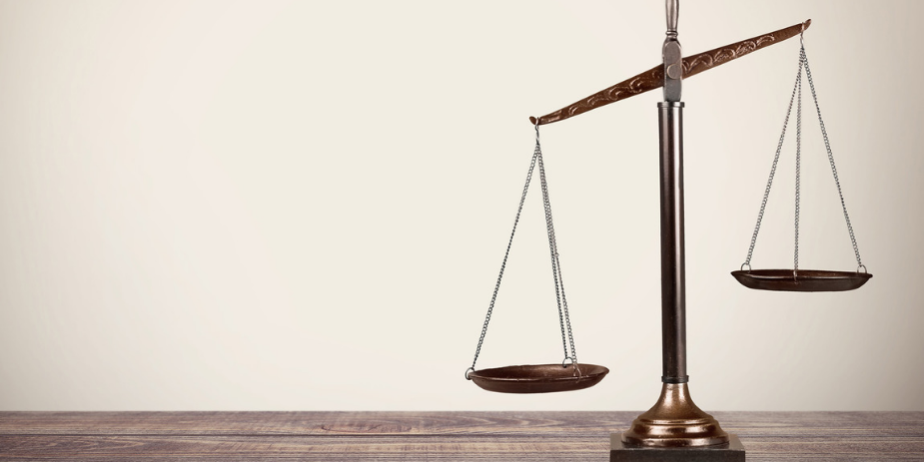 National Health Insurance (NHI), the Public Protector, Eskom, ANC infighting, Trump, Trade Wars, the Fed… the list goes on.  These are all factors that have been impacting the rand of late and may continue to do so for the foreseeable future.

Firstly, you may have heard this from us before, but the fate of the rand is more dominated by global factors (Trump’s tweets, Fed decisions, risk-off biases and emerging market sentiment) than it is by local factors. That’s not to say that local factors don’t matter, it’s just they don’t count as much as we South Africans think they do.

The following chart depicts the relationship of the rand to the MSCI Emerging Currency Index since the beginning of 2018. 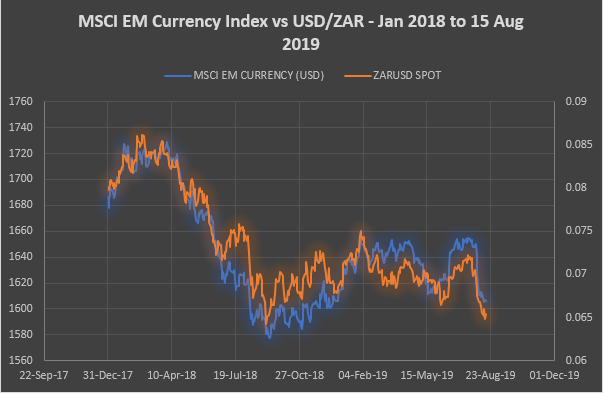 Source: Dynasty Asset Management, Data – Infront
It’s obvious that the two are highly interconnected. In fact, the rolling one-month returns of the two have a 78% correlation.  What’s not obvious, however, as they’re represented on two different axes, is that the rand is much more volatile than the MSCI EM Currency Index. The rand actually has a beta of 2.5 with respect to this Index, which implies that a 1% weakening of the Index leads to a 2.5% weakening of the rand, everything else being equal.

So, what we’ve established is that we’re not alone in this situation and that some of our fate is beyond our control. However, when you analyse the data closer, you do see that our own goals do impact the relative performance, especially in the short term.  These include: poor GDP figures announced in September 2018 and May 2019; country-wide stage four load shedding in March 2019; Eskom’s continual woes; land expropriation without compensation; Reserve Bank mandate tampering; the Public Protector; and more recently the NHI.

You will certainly have heard us outlining our positioning for our clients’ portfolios for a number of years now:

Our bearish view on the rand has partly attributed to our local portfolios having done very well on a peer-relative basis, as well as having outperformed their respective benchmarks over all periods out to three years. In fact, the Dynasty Wealth Preserver Fund is ranked in the top five in its sector over seven years, per Morningstar.

Prospects for the Rand Going Forward

In order to assess the prospects for the rand going forward, we try and come to conclusions about the impact of the two major categories discussed above – global forces and local political and economic issues.

Our view is that the global forces are volatile, unpredictable and, at best, slightly weighed towards the negative. Essentially there is a balance between risk-on and risk-off that occurs daily and even the smallest adjustment in the news can tip the scale completely in either direction. 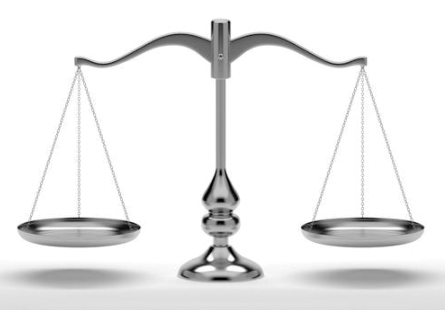 As an example, we saw how on 21 January 2016 the sentiment had a complete about-turn and shifted from a situation where emerging markets, resources and risk assets had been out of favour for years and then suddenly the tide changed, and these assets rallied hugely from this point.  On that day the rand was trading at R16.50/$.  It then gained 14% in less than three months, 20% in less than seven months and by the following year, in September 2017, despite the pending ANC Elective Conference, the credit downgrades and the pending doom, it was trading at R12.80/$.  Which highlights how it is possible for the rand to ignore local factors and strengthen beyond even the wildest expectations because global markets are bullish and in search of yield.

The opposite also applies, and the rand could continue to weaken and trade at greater discounts to fair value for extended periods, even if we’re getting our house in order and our fundamentals are improving. But they’re not!

There is also the factor of the inflation differential between the US and SA that leads to a weaker bias to the rand over time.

The below chart illustrates the long-term trend of the rand since the start of 1990, on a logarithmic scale.  The slope of the white trend line is 5.1% per annum, which suggests that the rand has been prone to weaken by 5.1% per annum against the dollar, on average, over the last 30 years. 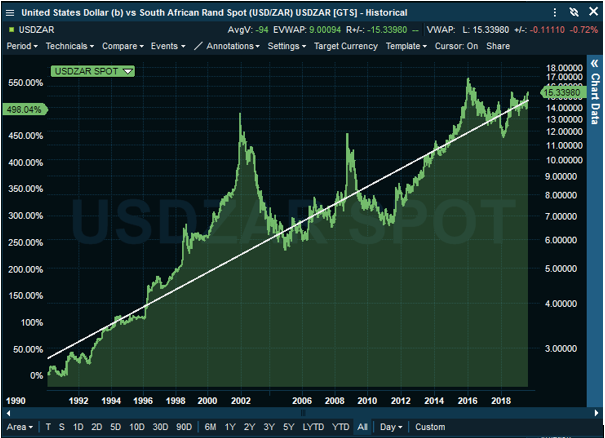 We must always remind ourselves that things could be a lot worse! Had the December 2017 Elective Conference swung in the other direction, which would have only taken 90 of the 4701 eligible votes to have switched from CR17 to NDZ for the result to be reversed (the winning margin was 179 votes), the current state of our nation would be very different. Despite the positive outcome, sentimentally we’re still burdened with the compromises that were reached from that very Conference – land expropriation without compensation, nationalisation of the Reserve Bank and NHI.

Sentiment aside, the economic fundamentals have not improved since then and are far below the optimistic levels that were anticipated as Ramaphoria set in, in early 2018. Many commissions later and the SOE’s have not yet turned the corner, and it may now be more difficult for them to do so. We’re a Moody’s downgrade away from being junk status on our local currency debt.

We, therefore, feel that the local factors tipping the scale are more quantifiable, more predictable and more structurally tilted towards the negative.

We therefore summarise, that in our view, the most likely possible scenarios as follows:

We’re not suggesting a knee-jerk reaction and a move to externalise funds en masse at rand levels of circa R15.20/$. The volatility of the markets implies that there will most likely be opportunities to buy dollars at below R15 in the coming months, but there are matters on the horizon, such as the Medium-Term Budget Policy Statement in October and Moody’s update on 1 November, that could be inflection points which lead to structural disjoints. We therefore continue to favour an incremental and resolute approach to increasing offshore exposure for all of those clients who are currently underweight offshore and have been waiting for an opportunity to act.