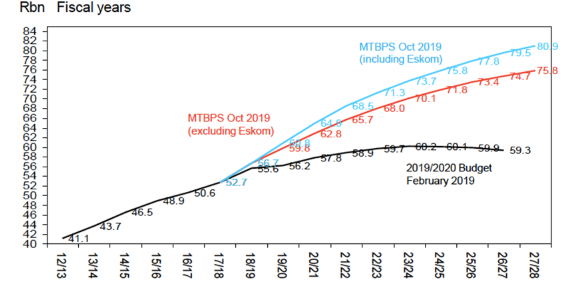 Obviously the Moody’s credit rating announcement scheduled for tonight is a primary concern for the financial markets and SA’s inclusion in the Global Bond Index, however for Government and even National Treasury, this is a secondary issue as the political composition of SA and decision making process is focussed on political implications rather than the financial implications.

Moody’s scheduled their review for tonight some time ago and at that time, the Medium Term Budget Policy Statement (MTBPS) was scheduled for the 23rd October. The Government delayed the MTBPS release by a week which has created some timing implications for Moody’s. They no longer have a week to review the MTBPS. Importantly, Moody’s are under no obligation to stick to any timeframe on an announcement. They do not have disclose what time they will release the announcement – typically they wait for market close (US market close would imply an announcement after 11.30pm this evening) but it can be released at any time. Moreover, they are not under any obligation to put out a rating update. They can simply say that there will be no update released until they have had a chance to do a more extensive review.

There are two components to a rating: the actual rating and the outlook. The outlook is important because it provides investors with guidance as to the likely direction of the next rating (within 12- 18 months). Moody’s have maintained SA on a stable outlook since 2018. Other agencies have downgraded SA but Moody’s hasn’t. “Stable” means that we foresee that the actual rating will remain unchanged for the next 12 – 18 months. That is fact and creates some certainty for the markets.

Moody’s has a different process and methodology to other agencies. They also place more weight on SA’s foreign debt level which is relatively small and it remains relatively small. This is the single biggest factor that has helped us in our Moody’s reviews in the past. They have had a more positive review of SA relative to other agencies all the way back to 1994, which has persisted.

However, the deterioration in SA’s fiscal numbers and the expected continued deterioration in these numbers is cause for concern. There has been a step change in the weakness of Government finances within 6 months (see chart below) in terms of both the fiscal deficit and the debt levels. Secondly, the Government is now clearly indicating that this step change is not going to be reversed any time soon. In fact, the Government is saying that it is going to continue to worsen which means a fiscal deficit > 6% of GDP and debt at levels of around 70% of GDP. That is too big a deterioration for Moody’s to ignore. It is unambiguously too significant. This will force Moody’s to make a ratings adjustment either now or sometime in the future.

There are 4 options for Moody’s:

If the outlook is revised, this implies that the currency is at further risk. While much of the news is factored in, the uncertainty during the next 12- 18 months of the next rating will weigh on the currency. What may help us is that many other Emerging Market (EM) countries have recently moved to junk status, namely Brazil and Turkey. There has been a deterioration in EM credit ratings in recent years and in some sense, “joining the crowd”, as such, may not make it so bad. Most EM are below investment grade. A downgrade below investment grade will remove us from the Global Bond Index within 24 hours (and hence a forced capital outflow from index tracking funds and active fund managers with specified mandates for investment grade), however there are still investors searching for yield and particularly a higher yield from an undervalued currency. So any initial negative reaction may stabilise on the back of this appetite with investors seeking value in the sell off.

It is expected that Moody’s will release an announcement tonight around 11.30pm. The massive change in the debt trajectory (in 6 months) is a massive concern and secondly there is little in the MTBPS to show how this is going to be rectified, controlled or reversed. 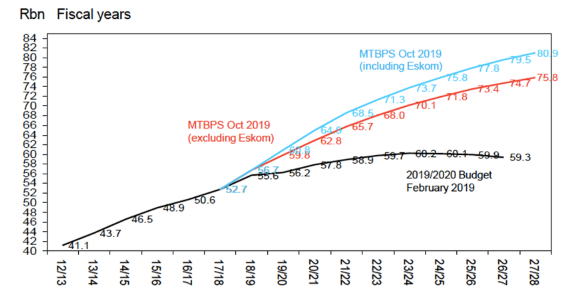