Kevin Lings: The convergence of two forces: fundamentals vs yield 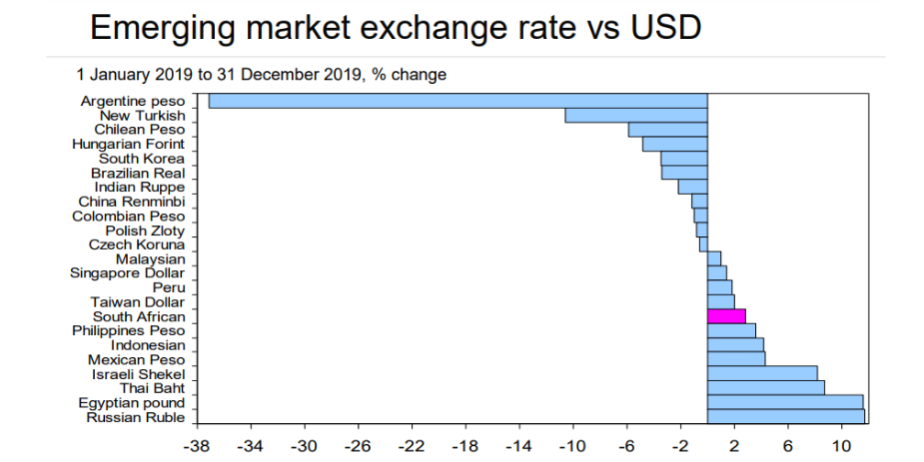 In 2019 the Rand strengthened by 2.8% against the US Dollar, after depreciating by -13.9% in 2018. In 2017 and 2016 the Rand had strengthened by 10.5% and 13.2% respectively, after collapsing by -25.4% against the US Dollar in 2015. Clearly the Rand is prone to substantial changes in value from one year to the next. Furthermore, this extreme oscillation in the value of the Rand has no immediate relationship with the underlying fundamental value of the currency – except over the longer-term.

Instead, in recent years the value of the Rand has primarily reflected the convergence of two powerful forces, namely the deterioration in South Africa’s economic environment (slowing GDP growth, deteriorating government finances and falling credit ratings), which creates downward pressure on the Rand including the desire by local investors to move more of their assets offshore, versus the attractiveness of South Africa’s relatively high interest rates within a global context, which has the tendency to attract foreign portfolio investment into the South African fixed interest markets, resulting in Rand strength.

In reviewing the performance of the Rand during 2019 there are two phases of performance that are worth highlighting. The first phase occurred in February and March when the Rand weakened by a total of -9.3%. This decline in the value of the Rand partly related to the deterioration in South Africa’s fiscal position that was announced by the Minister of Finance in the February 2019 National Budget and the increased prospect of South Africa experiencing a further credit rating downgrade. This deterioration reflected the combined impact of three key factors namely a decline in tax buoyancy (government collecting less tax revenue for every unit of GDP growth compared with earlier years), a very weak economic environment as evidenced by further downward revisions to government’s GDP growth assumptions, and the need for government to provide additional funding to the State Owned Enterprises, especially Eskom.)

The second phase occurred in November and December when the Rand strengthened by a combined 7.8%, making it the best performing emerging market currency in the final two months of the year. The reason for this phase of relative out-performance partially related to the Reserve Bank’s decision at their MPC meeting in November to keep interest rates on-hold despite the fact that South Africa’s economic fundamentals (weakening economic growth and slowing inflation) would have justified a cut in interest rates. This decision suggested that the Reserve Bank would keep interest rates relatively high (especially in real terms) until that were able to assess the impact of the February 2020 National Budget and likely credit rating downgrade by Moody’s in March 2020. This provided foreign bond investors with a clear buying opportunity, despite a further sharp deterioration in South Africa’s fiscal position, announced by the Minister of Finance in the October MTBPS.

Despite the relative strength of the Rand towards the end of 2019, the South African currency remains vulnerable. This vulnerability exists for a variety of reasons, including ongoing weak economic growth, a further deterioration in SA’s fiscal position (including the funding of SOEs), the risk of foreign capital outflows should Moody’s downgrade South Africa’s credit rating, the country’s relatively large current account deficit, and the perpetual concern that there is an unexpected increase in global risk aversion brought about by a tightening of global financial market conditions. In the first two weeks of 2020 the Rand has weakened by 3.2%, more than offsetting all of the gain in 2019.

In 2020, we expect the Rand to come under pressure, weakening to around R15.60/$ by end 2020. This forecast is partly due to our expectation that the South African economy will remain weak in 2020 with GDP growth of less than 1% (plagued by regular electricity outages as well as weak business and consumer confidence), a credit rating downgrade by Moody’s to below investment grade, a further noticeable increase in government borrowing, and ongoing social instability related to poor service delivery and rising unemployment. While the impact of these factors on the Rand can be partially offset by the relatively attractiveness of South Africa’s interest rates within a global context, the Reserve Bank will come under increasing pressure to cut rates in H2 2020 in an endeavour to boost growth, especially if the currency impact of a downgrade by Moody’s is relatively modest or fairly short-lived.

Under these circumstances it is critical that South Africa changes current investor perception that the country is “one of the more vulnerable emerging markets that has become reliant on maintaining relatively high interest rates in order to support the currency” and instead enforces the idea that South Africa is “an emerging economy looking to increase investment in order to lift economic growth and development”. 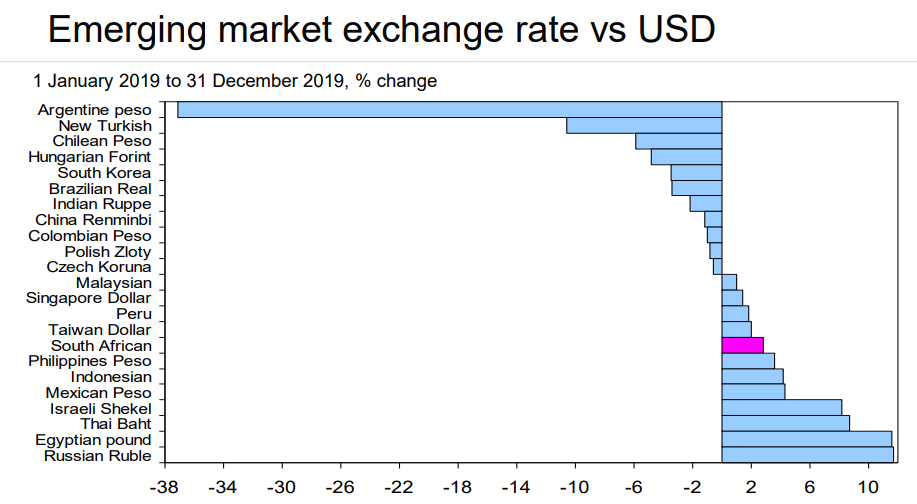