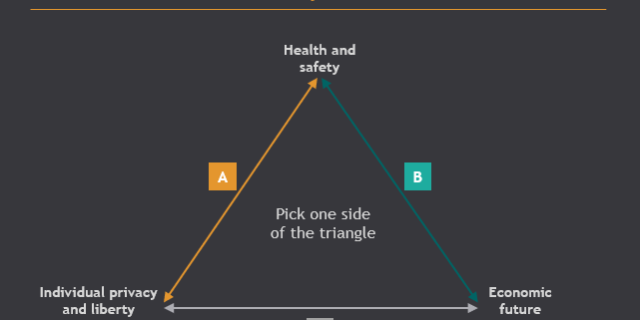 “Trilemma” is a term in decision-making theory. Unlike a dilemma, which has two solutions, a trilemma offers three equal solutions to a complex problem. However, the options of a trilemma are conflictual because of mutual exclusivity, which makes only one option of the trilemma achievable at a given time.

From an investment perspective, there is currently a “trilemma of concerns” as depicted in the image above. Finding acceptable trade-offs between these confronting dynamics is what will shape social circumstances, economic recovery, and individual liberty in the near future.

“Much of the COVID-19 pandemic has turned into a shared experience involving a trilemma of concerns. People across the US are worried about their: (1) personal health and safety; (2) economic future and job security; and (3) individual privacy and liberty.”