As we enter the home stretch of 2019, many of the same themes that have dominated headlines for the past three years continue to dictate the direction of the markets. But in addition to the volatile brew of Brexit, trade wars and instability in the Middle East, a number of analysts and economists are beginning to see signs that a global economic slowdown is imminent.

South African markets, meanwhile, are being shaped by a volatile rand, slow GDP growth, and persistent concerns about the debt levels and slow pace of reforms at state-owned enterprises (SOEs). Let’s take a closer look at how the third quarter unfolded. 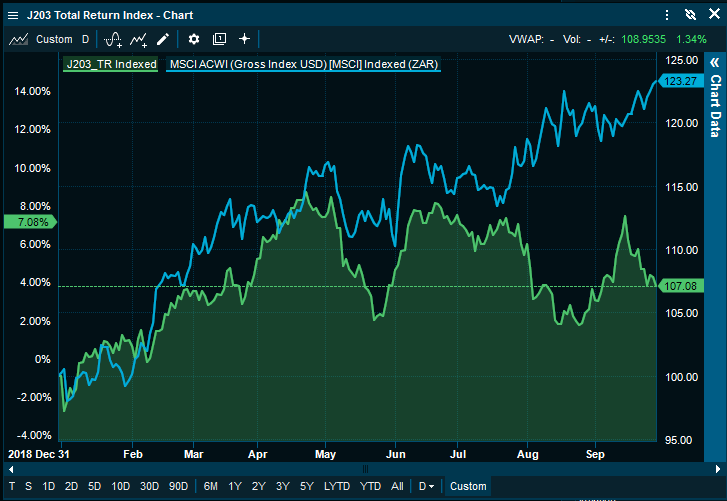 Source – Infront: Year-to-date the JSE ALSI and MSCI ACWI both in rand terms

Our decisions earlier this year to reduce exposure to mid and small-cap JSE shares and to focus on the All Share Index rather than trying to pick sectoral winners continued to pay off for us. Moving into Q4 2019, we remain concerned about South Africa’s long-term economic performance and the volatility of the rand and will continue to position our clients’ portfolios appropriately.

The outlook for the rand

In Q3, the rand shed around 7.7% of its value against the dollar. This, and the impending events, indicate that the currency is likely to remain volatile in Q4, with a long-term trend downwards (weaker). As always, the rand’s performance is partly shaped by local political and economic factors, but also largely by international factors such as the appetite for risk among international investors and Fed interest rate decisions.

Overseas portfolio investors are selling more South African assets than any previous year, a trend which is negative for the rand. The lack of appetite for South African bonds in a time of low and even negative interest rates in many parts of the developed world indicates a lack of confidence in the South African economy and the state of public sector finances.

The Finance Minister’s Medium Term Budget Speech (30 October) and a sovereign credit rating decision from Moody’s (1 November) may move the rand significantly, if they contain surprises. Moody’s has indicated that it is likely to maintain South Africa’s investment-grade credit rating for now, with the proviso that a clear and coherent plan needs to be established for Eskom.

High debt levels at SOEs – particularly Eskom – and a lack of appetite for the politically unpalatable steps needed to restore governance and restructure debt continue to weigh on the performance of the rand. We are not likely to see this change in the short term unless Finance Minister Tito Mboweni can offer some credible plans in his speech at the end of the month.

In the face of growing concerns about slowing global growth, the prospect of a messy Brexit process and more heated trade war rhetoric, we will follow the same philosophies that have historically enabled us to protect and grow our clients’ wealth. By investing in quality funds and assets, we will look to better weather short-term volatility, while also tapping into the growth opportunities offered by global markets