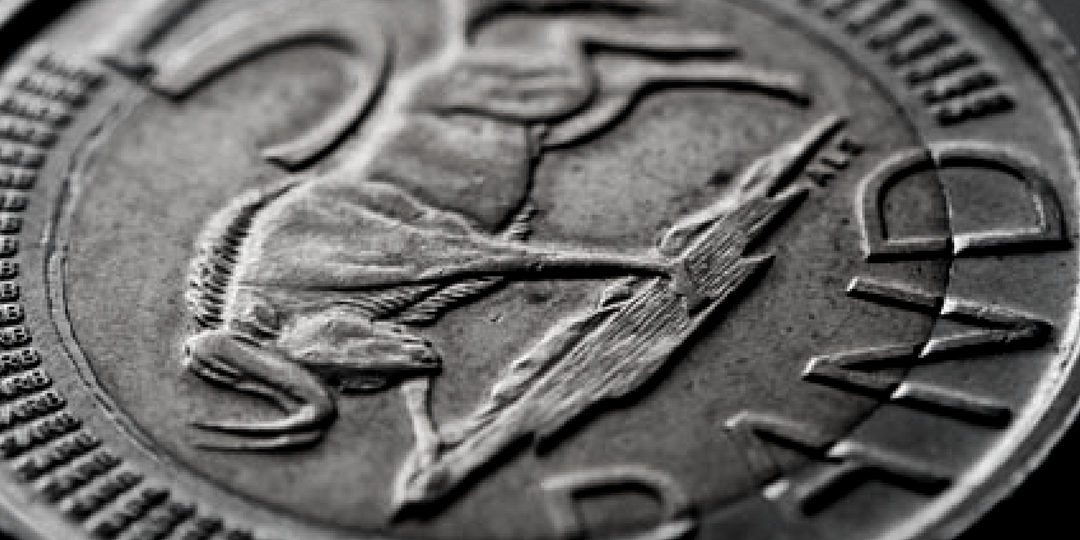 The South African rand has been under microscopic focus for most of 2017, with a few periods of respite. Though some commentators – and some indicators like the Big Mac Index – suggest that the rand is undervalued at current levels, we feel that South African investors should prepare for the currency to continue declining in value against a basket of developed world currencies.

In the early 1980’s, the rand was worth around US$1.40 –  and at the advent of democratic South Africa in 1994, the exchange rate was R3.55 to the dollar. At the time of writing, the exchange rate is around R13.65. The graph below shows how the rand is volatile, with dramatic periodic spikes and recoveries, but the net result is a long-term downward trajectory. 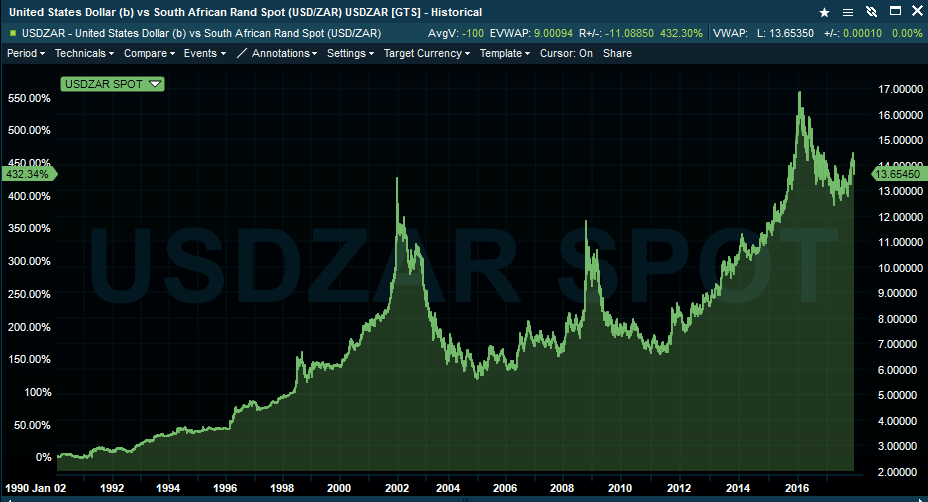 There are two factors that drive the value of the rand: sentiment and fundamentals. South Africa’s macroeconomic fundamentals are looking shaky – which is why all of the major rating agencies except Moody’s (where the local rating is on a 90-day review) have downgraded our foreign and local sovereign credit to junk status.

Another fundamental factor is the inflation differential over time. While South African Inflation is at around 4.8% currently, down from levels that approached 7% last year, the long-term forecast priced by the market is around 6%. By contrast, we’re looking at inflation of around 2.2% in the US, 1.5% in the Eurozone and 3% in the UK (which too has suffered a Brexit-related revaluation of its currency). The rand should, in theory, devalue against another currency by the difference between South African headline inflation and inflation in the country to which it is being compared.

If you look at the long-term trend and even-out the volatility, you’ll see that the rand has devalued at a rate of around 6% a year against the US dollar since 1994 – and the inflation differential explains at least part of the decline. Unless inflation moderates – unlikely in a developing country with a growing population – we can expect the rand to continue declining in value by around 4-6% a year against the euro and the dollar.

The second factor is sentiment – which is about investors’ perceptions of the country and the global economy. Fundamentals, of course, have a major influence on sentiment. Economic indicators such as our high unemployment numbers, lacklustre GDP growth and weak consumer spending do not paint a flattering picture for local or international investors.

The result is an outflow of capital from the country, apart from relatively resilient interest in government bonds despite a weaker currency. Foreign companies are not targeting South Africa for growth, international funds are selling South African shares, and local investors and companies are looking abroad for opportunities rather than in the South African market.

Negative sentiment about South Africa is also fuelled by political instability, poor governance of state-owned enterprises, worries that fiscal policy is becoming looser, and concerns that government might be adopting policies that are unfriendly to business. These are all factors that are within South Africa’s power to control – the appointment of a new president with a more business-friendly agenda and without allegations of corruption and cronyism hanging over his head, would almost certainly lead to an immediate strengthening of the rand, but for how long?

There is an element of sentiment that the South African government cannot control, which is about global investors’ appetite for risk and their perceptions of the potential returns they can get from emerging markets. If there is an upset such as a major terrorist attack on US soil, or a prospect of war or upheaval in a major emerging market, investors will usually sell riskier assets such as emerging markets and turn to safe-haven assets such as gold and US Treasury Bonds.

In these scenarios, global yield-seeking investors place a higher country risk premium on emerging markets, causing all emerging market currencies to fall, including the rand. As it happens, however, the world is currently in a period of synchronised growth, stock markets worldwide have had a good year, and emerging market assets have performed well, causing the country risk premia to fall to record lows. Any negative sentiment towards South Africa – our well-documented domestic problems and weak economic fundamentals – have been overshadowed for the moment by this global upturn.

For individual investors, the long-term trend is clear: the rand has declined consistently in value for the past 30 years and is likely to continue to do so looking ahead over the next decade. Even under the most favourable assumption of vastly improved governance and a steady improvement in economic fundamentals, the rate of decline of the rand would most likely reduce, rather than reverse.

For that reason, our advice to investors is to keep a healthy exposure to offshore assets, even during periods of rand strength.