The Art of Technical Analysis in Investment Markets

In 2017, the Nobel Prize for Economics was awarded to Richard Thaler, who is an American economist and the Charles R. Walgreen Distinguished Service Professor of Behavioral Science and Economics at the University of Chicago’s Booth School of Business. In many quarters, Thaler was a controversial choice. For some in the profession, the idea that psychological research should even be part of economics has generated hostility for years. Thaler studies behavioural economics and finance as well as the psychology of decision-making which lies in the gap between economics and psychology. He investigates the implications of relaxing the standard economic assumption that everyone in the economy is rational and selfish, instead of entertaining the possibility that some of the agents in the economy are sometimes human.

The concept of behavioural finance has also entered the realm of decision-making for many investors when they decide what investment instruments to buy (such as shares for example). In this case, we are referring to technical analysis – a branch of analysis that is also both controversial and polarising. Fundamental analysis is one part of the equation for stock market success. The most pristine balance sheet in the world, the most consistent year over year or quarter over quarter expansion in revenues or profits do not mean anything if other people are not willing to pay more for a share than you did. A decision to buy a share increases the demand and a decision to sell a share increases supply. The aggregate of all the investor decisions at any point in time will either move the price up (if demand exceeds supply) or move the price down (if supply exceeds demand) or be neutral if supply and demand are matched. The purpose of technical analysis or chart reading or chart analysis is to determine the probable strength of demand versus pressure of supply at various price levels, and thus to predict the probable direction in which a share price will move, and where it may end up. Many market participants consider this form of analysis to be an added edge when trading in the markets while many others view this as hocus pocus. That said, there is no infallible system for predicting share prices, and that is why technical analysis is more likely to be called a form of art than a form of science.

However, some basic examples from the world of investing are illuminating and may serve to prove the point that additional valuable information can be generated.  Just as technical analysis has been applied to shares, it has also been applied to aggregate collections of shares (stock market indices such as the FTSE/JSE All Share Index), or currency pairs (such as the rand/dollar exchange rate (ZARUSD)).

The first technical pattern that we will address here is the trend line.  A mere glance at some share price charts will reveal that prices have a prevailing tendency to move in a particular direction for a considerable time. A closer examination will show that this tendency, or trend, frequently assumes a definite pattern, zig-zagging along an imaginary straight line. In fact, this ability of prices to cling extremely close to a straight line is one of the most extraordinary characteristics of chart movements (red lines in the chart below for the FTSE/JSE All Share Index).

Stock prices trace various patterns for reasons based in human psychology – and it is psychology that determines share price movements. In terms of mechanical physics, it is often likened to the law of inertia: that an object in motion will continue in motion in the same direction until it meets an opposing force.

The chart above shows how the level of the FTSE/JSE All Share Index zig-zagged around a straight line for a period of three years from the middle of 2013 to the middle of 2017. Moving the horizontal line upwards leads to a sideways trend line at which any buyer wanting to buy this index was met by a seller willing to sell the index at a level of around 55,000. This trend line is often called a resistance line, meaning that there are enough sellers of the index at 55,000 to satisfy all buyers and thus preventing the index from moving higher. For the index to move higher, something in the supply/demand equation needs to change.

In the middle of 2017, the technical analyst would have drawn a lower line that slants up to meet the horizontal resistance line to form an ascending triangle. This pattern suggests a line of supply available at the price represented by the resistance line, while demand becomes more aggressive – that is, more willing to meet the supply price – as time goes on. This is considered to be a bullish technical pattern with the potential for demand to overcome supply at the resistance level and thereby push the index higher. 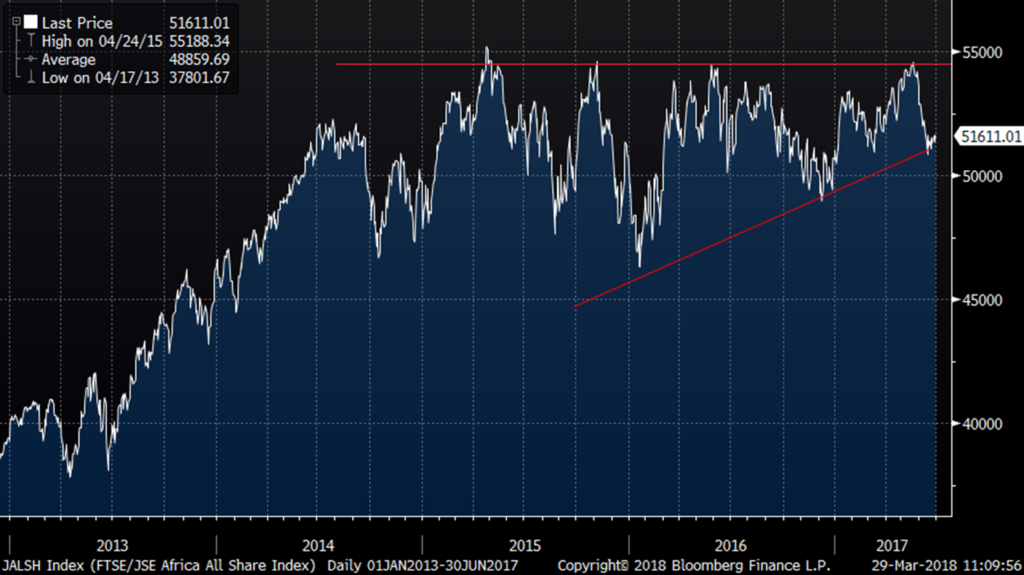 Indeed this was the case, with the FTSE/JSE All Share Index producing major gains in the second half of 2017, as shown in the chart below. 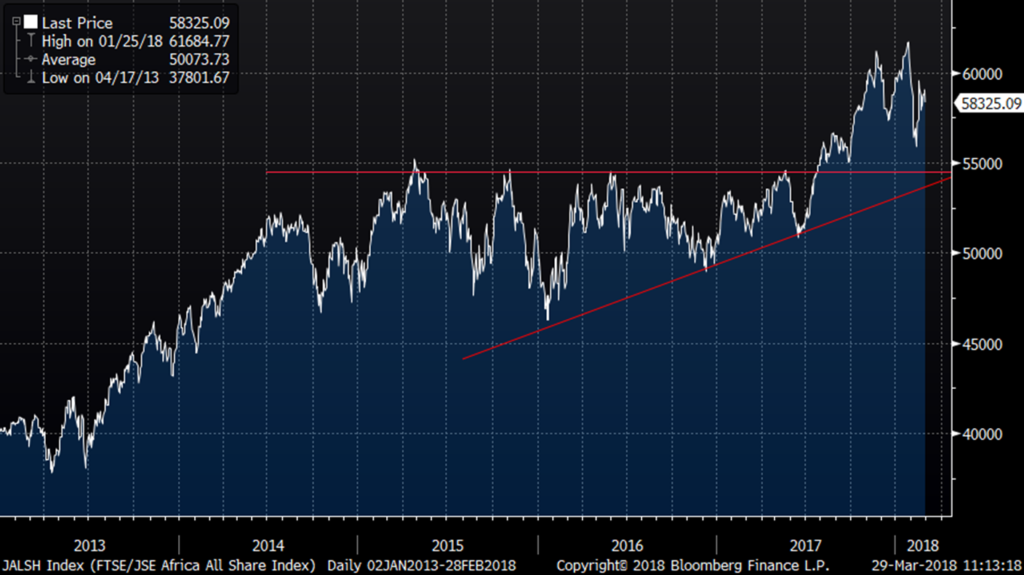 Stock market technicians have experimented over the years with any number of methods for detecting or measuring trends. Many use some kind of moving average in an effort to iron out the daily fluctuations. One advantage of such an average as a measure of trends is that it is produced by a simple arithmetic computation and does not rely on personal judgement. The moving average that covers about 200 trading days has won great favour among analysts as a measure of long-range trends. The chart below shows the 200-day moving average for the rand/dollar exchange rate (ZARUSD) from 2010 to early 2016. For most of this time, the 200-day moving average was the resistance level to further ZARUSD strength while suggesting at the same time that the weakening trend in the exchange rate could persist. 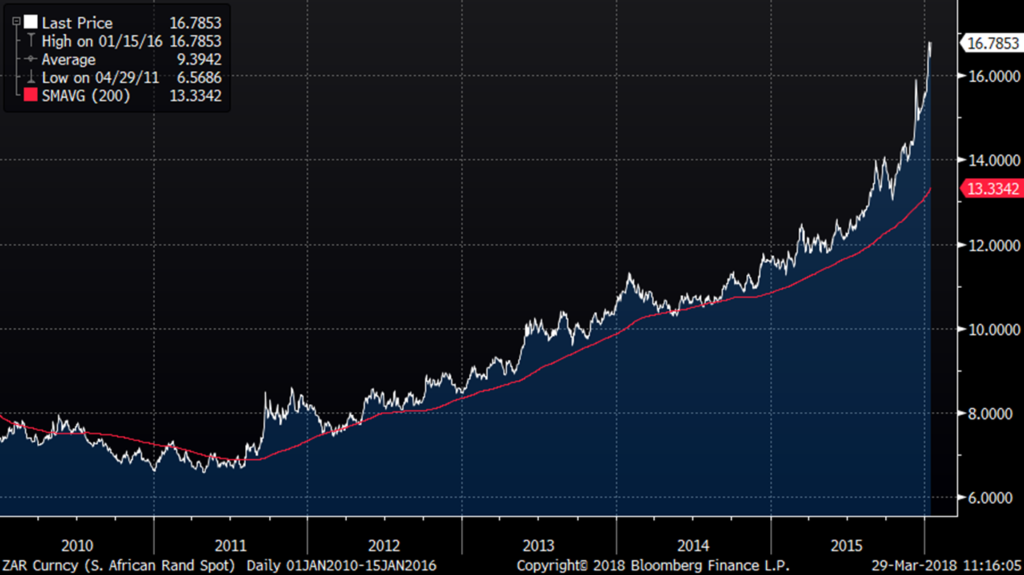 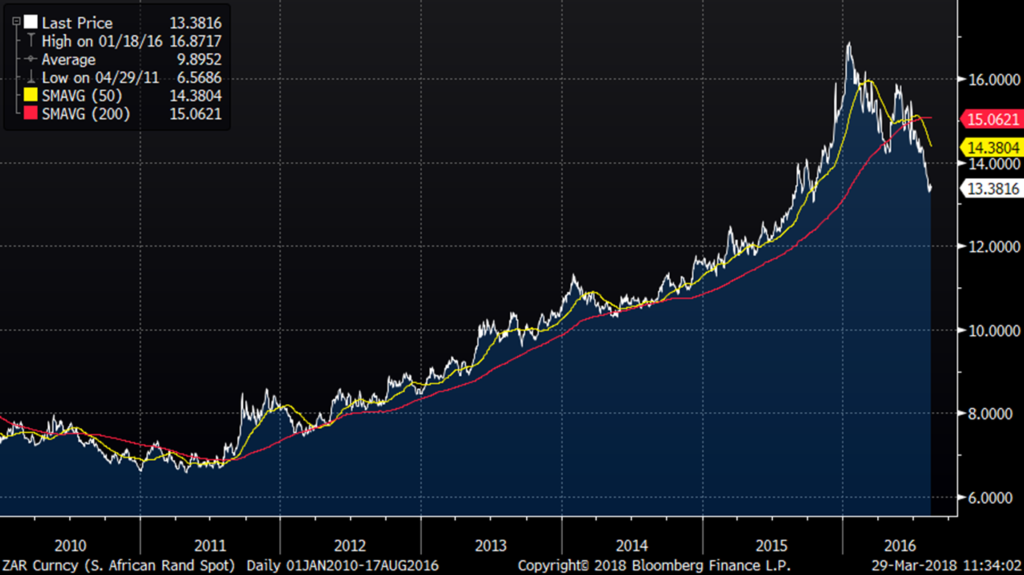 Technical analysis or chart reading as some may call it is an art, not a science, and many a pitfall awaits the investor who forgets this. The definition of long in long-term trend is not given and “long-term” may at times be much shorter than the investor will be comfortable with. One of the limitations of technical analysis is bombshells. These are dynamic events that can reverse chart trends without warning, and over time periods that are very short. The South African political arena is not short of such events and the 200-day and 50-day moving averages are a testament to this – extending the above chart of the ZARUSD to the present, it is clear from the next chart that two bombshells were delivered in a short space of time.  A year after the golden cross in 2016, the death cross appeared early in the final quarter of 2017 when the political landscape in the country rapidly deteriorated as the Zuma faction stepped up its fight for control of the ANC. Then in February 2018, the golden cross appeared again as the currency confirmed a strengthening trend after the Ramaphosa victory at the ANC elective conference at the end of 2017. 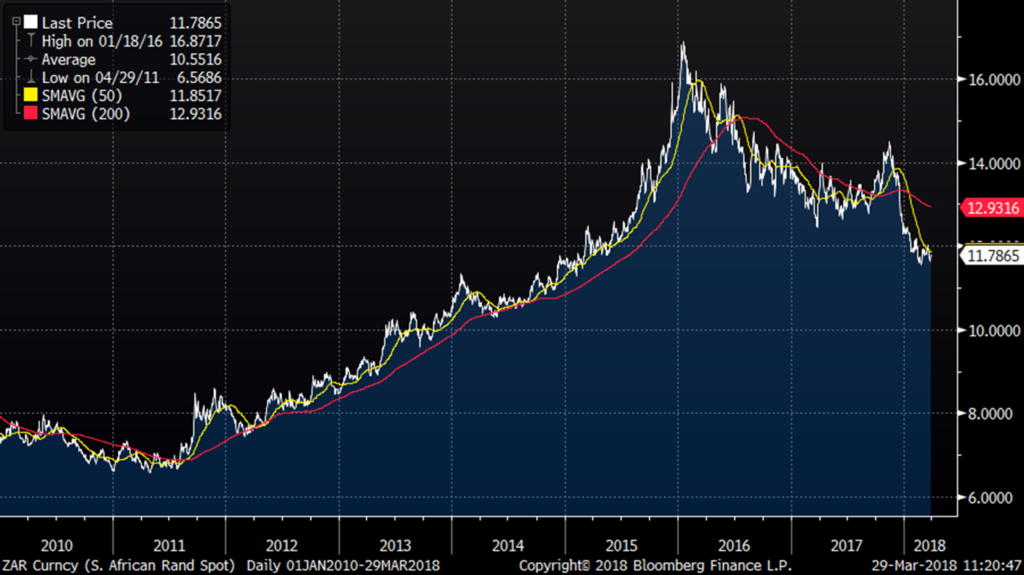 This outcome suggests that sound investment decisions cannot be made by relying on any single set of inputs. Fundamental analysis, economic analysis, and political analysis should in combination be pillars of investment decision-making. However, the art of technical analysis, if correctly applied, can offer another perspective on markets by providing input based on the aggregate psychology of all market participants at any point in time.  Technical analysis is often used to determine what the herd is doing, and this can provide valuable information regarding the timing of investment activities.